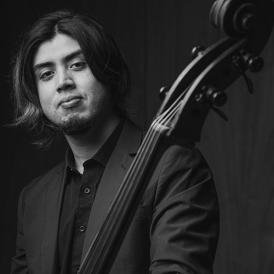 Born in San Vicente (Chile) in 1996. Since 2021, he studies at the Reina Sofía School of Music’s Unidad Editorial Double Bass Chair with professor Duncan McTier. He has been granted scholarships by MAEC/AECID and Fundación Albéniz. He plays a Tyrolean double bass from the end of the 19th century, loaned as an instrument scholarship by Fundación Albéniz.

He became acquainted with the double bass during his time as a student at his hometown’s music school and it soon became his main instrument. After several years under the mentorship of professor Vilma Guerrero, he entered the degree in Performance at the Major University of Chile’s Music Conservatory, under the guidance of Maestro Sebastián Espinosa. He has also attended masterclasses by Alain Posch.

He has performed as soloist with several orchestras throughout the country, currently playing the double bass at the Major University’s Orchestra. He has also won different awards and distinctions and has participated in several festivals such as that of the Schleswig-Holstein Orchestra Academy (Germany) or Portillo’s Chamber Music Festival (Chile).

He has performed in important national and European venues, such as Santiago’s Municipal Theatre (Chile), Konzerthaus Berlin and Elbphilarmonie (Germany), among others.

As a student of the School, he has performed with the Fundación EDP Camerata, conducted by Paul Goodwin, and he is currently a member of the Unidad Editorial Bottesini Double Bass Quintet.