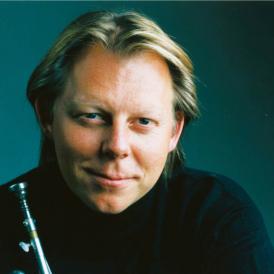 Ole Edvard Antonsen is regarded as one of the world’s leading trumpet soloists today and he is one of Norway’s greatest international stars.

Antonsen has played as a soloist on the major music scenes and stages in more than 45 countries around the world, such as the Carnegie Hall in New York, Musikverein in Vienna, Suntory Hall in Tokyo, Sydney Opera, Barbican Hall in London, Berliner Philharmonie, in addition to big stadiums such as the Olympiahalle in Munich and the Seoul Olympic Stadium, among others.

Pop and rock musicians like John Miles, Level 42’s Mark King, Lisa Stansfield, Rickie Lee-Jones, Ute Lemper and Secret Garden are also amongst his collaborators as well as jazz ensembles like the Metropole Orchestra (Holland), Willem Breuker Kollektief and his own jazz ensembles.

Ole Edvard Antonsen has recorded more than 50 solo CDs in all genres for labels like EMI, Universal, BMG and BIS.

In 1994 he recorded the official Olympic Fanfare for the winter Olympics in Lillehammer and he also played at the closing ceremony in Albertville Olympics in 1992.

Antonsen has premiered more than 60 major works especially written for him. Throughout the last 10 to 11 years, he has also composed pieces he has recorded on CD and played on tours on more than 400 concerts around the world under the title “Musical Landscapes”.