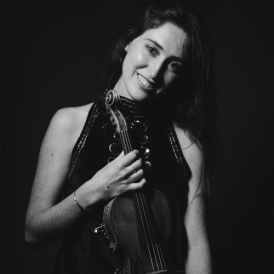 Born in Los Angeles, United States, in 1995. Since 2020, she studies at the Reina Sofía School of Music’s Telefónica Violin Chair with professor Zakhar Bron. She has been granted scholarships by Bloomberg LP and Fundación Albéniz. She plays an Arcos González baroque violin bow, loaned as an instrument scholarship by Fundación Albéniz.

She began playing violin at the age of three and studied at the Royal Conservatory of Toronto (Canada), where she won the Concerto Competition. She is also winner of the ASCAP Young Artists Award (2014) and that of the 3rd CullerArts International Violin Competition (Spain, 2021).

She made her debut as soloist with the Symphony Orchestra of Alicante at the age of 10. Since then, she has performed as soloist in several countries, including Spain, where she lived much of her childhood. At the age of 14 she appeared on Televisión Española in the "Young Soloists" series.

In 2007 she became one of the founding members of the Villanueva de los Infantes International Classical Music Festival (Spain), in which she participated as soloist with orchestra and in chamber music recitals until 2017. She was also associate concertmaster of the American Youth Symphony of Los Angeles (United States, 2017-2020).

She has also taken part in several films with composers Ramin Djawadi, Lorne Balfe, and Ilan Eshkeri, as well as in musical projects with artists such as Green Day, Marco Antonio Solís, and CHVRCHES.

As a student of the School, she has attended masterclasses by Giovanni Guzzo, Linus Roth and, Oliver Wille, as well as by Ralf Gothóni and Ana Chumachenco (groups with piano). She has also been part of the Freixenet Symphony Orchestra, conducted by Pablo Heras-Casado, and of the Camerata Fundación EDP, conducted by Giovanni Guzzo, with whom she has also been soloist under the baton of Paul Goodwin. In 2021 she participated in the 30th anniversary tour of the School with the Freixenet Symphony Orchestra, conducted by Andrés Orozco-Estrada, with whom she performed at Madrid's Teatro Real, at Bratislava's Reduta Hall, at Budapest's Liszt Ferenc Academy and at Vienna's Musikverein.
She is also a member of the Enagás Schumann Trio.