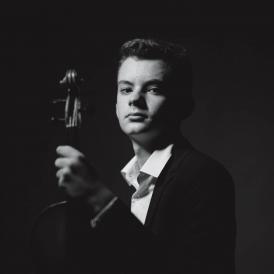 Born in Gelves (Spain) in 2003. Since 2018, he studies at the Reina Sofía School of Music’s Fundación BBVA Viola Chair with professor Diemut Poppen. He has been granted scholarships by Jaime Castellanos and Fundación Albéniz.
At the age of eight, he entered the Francisco Guerrero Conservatory of Music with professor Marta Domínguez. He also studied at the Barenboim-Said Foundation’s School of Orchestral Studies with Jacek Policinski.
In September 2017 he was selected as active student of the Turina Festival, where he attended classes by Lise Berthaud. He has been part of the Youth Baroque Orchestra of Seville and that of the Sinfonietta of San Francisco de Paula (Seville), with whom he performed as soloist Telemann’s Viola Concerto under the baton of Michael Thomas.
In August 2019 he participated at the Soloists Competition, organised by the Andalusian Association of Viola, in which he was awarded one of the extraordinary prizes, which led him to perform as soloist with the Violas Ensemble of Málaga in the 2019-2020 season. In 2020 he was awarded first prize within the D category of viola at the City of Vigo Competition.
As a student of the School, he has attended masterclasses by Lawrence Power, Tabea Zimmermann, and Luis Fernando Pérez (piano groups) and he has been part of the Vivaldi Estaciones Ensemble. He is currently a member of the Casa de la Moneda Scarlatti Ensemble.