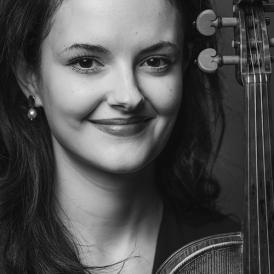 Born in Madrid, Spain, in 1998. Since 2020, she studies at the Reina Sofía School of Music’s Fundación BBVA Viola Chair with professor Nobuko Imai. She has been granted scholarships by Consejería de Educación, Universidades y Ciencia de la Comunidad de Madrid and Fundación Albéniz. Her Majesty Queen Sofía handed her the Diploma to the most outstanding student of her chair in the 2021-2022 academic year.

From 2014 to 2017 she studied at the Reina Sofía School of Music’s Fundación BBVA Viola Chair with professor Diemut Poppen, where Her Majesty Queen Sofía handed her the Diploma to the most outstanding student of her chair. Between 2017 and 2020 she completed her Bachelors degree at the Munich’s Hochschule für Musik und Theater (Germany) with professor Hariolf Schlichtig.

She has performed as soloist together with orchestras such as the Philharmonic Orchestra of Castilla la Mancha, the Andrés Segovia Chamber Orchestra, the Orquesta Sinfónica de Cuenca (Ecuador) and the Freixenet Symphony Orchestra of the Reina Sofía School, in some of the most important venues in Spain such as Royal Theatre, Barcelona's Palau de la Música, Oviedo’s Príncipe Felipe Auditorium, or Madrid’s National Auditorium.

Combining her university studies and solo concerts, Cristina has developed a great passion for chamber music: She is a member of the Stoneshield Quartet under the guidance of professor Heime Müller (Artemis Quartet) and, as part of the Tedesco Quintett she has won the 1st Prize at the International Chamber Music Competition Gerhard Vogt 2019, Germany. She has performed in several festivals around Europe such as Eggenfelden Klassisch, Kammermusik Festival Hohenstaufen, Ticino Musica and Schloss Elmau Festival. Moreover, she premiered various pieces composed for a viola solo at the 2020 Impuls Festival Enter the void.

Her creative mind has led her to seek new ways to expand the repertoire of her instrument and to offer original proposals to modern audiences, participating in "Romeo and Juliet: Music and History": a new project in which the pianist Juan Barahona and the violist combine the music of S. Prokofiev's ballet with Shakespeare's unforgettable story, bringing together narration and performance in a very special format.

As a student of the School, she has performed with the Freixenet Symphony Orchestra, conducted by Pablo Heras-Casado and David Afkham, within the Banco Sabadell Young Talents, and within World Heritage Cities series (Mérida) and the AIE Clásicos en Ruta (Madrid and Albacete). She has also been part of the Enagás Schumann and Stoneshield quartets and is currently a member of the Asisa Óscar Esplá Quartet.