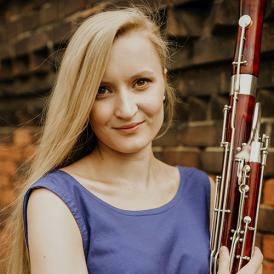 Born in Bratislava, Slovakia, in 1992. She studied at the Conservatory in Prague with the Talich Philharmony and at the Felix Mendelssohn Bartholdy University for Music and Theater in Leipzig with Jörg Michael Thomé. She has performed with the Royal Philharmonic, the Prague Chamber Philharmonic, the National Czech Symphony, and FOK. She is currently part of the Czech Radio Symphony. She has been awarded the 2015 LFA Competition in Czech Republic and, as a member of chamber groups, in the ISA Competition in Austria, Henri Tomasi International Woodwind Quintet Competition in France, and Karel Dittersdorf in Czech Republic. As soloist, she has performed at the Prague Vivaldi Collegium, Barocco Sempe Giovane, and Baroque Orchestra of Prague. She was also recipient of the Deutschland Stipendium in 2017-2018.