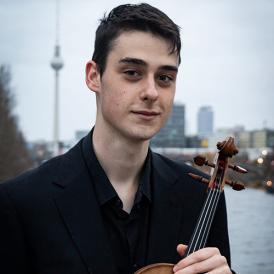 Born in Logroño, Spain, in 2003. He started to play the viola at the age of five. Between 2014 and 2019 he studied with Ashan Pillai in Madrid and, from 2019 to 2021, with Yuval Gotlibovich in Barcelona. He is currently pursuing his Degree at the Berlin University of Arts with professor Hartmut Rohde. He has won the Artur Fernandes Fao International String Competition in Portugal and, in 2019, he passed the auditions to become viola solo at the Royal Concertgebouworkest Young, with whom he has performed at the Het Concertgebouw Ámsterdam and at Brussels’ Flagey. In 2020 he was selected to participate in the Youth Orchestra of the Verbier Festival in Switzerland. He has also appeared in other festivals such as the After Cage contemporary music or the Mit-Musik-Miteinander at the Kronberg Academy.