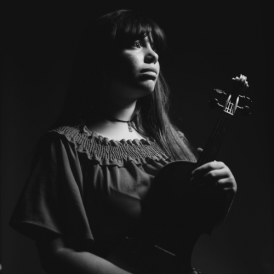 Born in Tarragona, Spain, in 2005. Since 2020, she studies at the Reina Sofía School of Music’s Telefónica Violin Chair with professor Marco Rizzi. She has been granted scholarships by Mundo en Armonía and Fundación Albéniz. She plays a 18th century violin of luthier Johann Gottlieb Martin, loaned as an instrument scholarship by Juan Zozaya Stabel-Hansen.

She studied until 2011 at the Vila Seca Professional Conservatory of Music in Tarragona with professor José María Ferrando and since 2018, with Sergey Teslya. She has attended masterclasses by Tatiana Aleshinski, Josep Colome, Yuri Volguin, Yuliya Kriktus, Evelio Tieles, and Ralf Gothóni (groups with piano). She made her debut as soloist at the age of eight with the Ariège Chamber Orchestra in France. She has also performed as soloist with the Alessandria Chamber Orchestra, XXI Camerata Orchestra, Gnessin Virtuosi, and the Youth Orchestra of Taiwan, with whom she performed the Asian premiere of the version for violin and orchestra of Paganini’s Caprice 24.

From an early age she has been giving recitals in countries such as Italy, Spain, France, Taiwan, Russia, Japan, Portugal, Greece, and Switzerland, while also getting involved in jazz and popular music.

As a student of the School, she has been part of the Freixenet Symphony Orchestra, conducted by Pablo Heras-Casado. In 2021 she participated in the 30th anniversary tour of the School with the Freixenet Symphony Orchestra, conducted by Andrés Orozco-Estrada, with whom she performed at Madrid's Teatro Real, at Bratislava's Reduta Hall, at Budapest's Liszt Ferenc Academy and at Vienna's Musikverein. She is currently a member of the Banco de España Arriaga Ensemble.