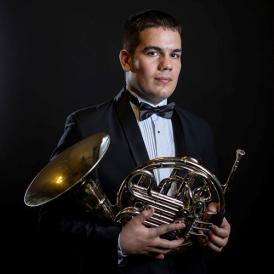 Born in Budapest (Hungary) in 1995. After finishing his secondary school, he participated a year at the Bard Conservatory, USA, and had the chance to study with the horn players of the Metropolitan Opera and the Philadelphia Philharmonic. This year he has finished his studies t the Liszt Academy in Budapest (Hungary) with Professor Zoltán Szőke, principal horn player of the Budapest Festival Orchestra. This year he has won 2nd prize at the International Brass Competition in Brno (Czech Republic). Since 2018, he is a member of the Danubia Orchestra in Budapest. Before this year he has already participated the Encuentro 4 times.