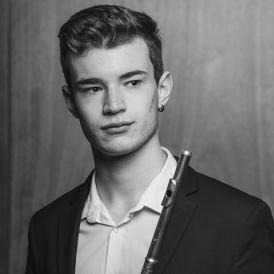 Born in Madrid, Spain, in 2003 in a family of musicians. Since 2021, he studies at the Reina Sofía School of Music’s Flute Chair with professor Jacques Zoon. He has been granted a scholarship by Fundación Albéniz.

At the age of 7 he began his flute studies at Madrid’s Teresa Berganza Conservatory under the guidance of José Miguel Domínguez and Vicente Cintero, and he furthered them with Ana Herrero, always getting the highest qualifications.

He has attended improvement courses by Salvador Espasa, José Sotorres and Eduardo Costa, among others, and participated in the Madrid National Flute Encounter in 2018 and 2019. He has also attended classes by other prestigious flautists such as Pablo Sagredo and Matthew Wilkie (wind ensembles).

He has performed as soloist with his Conservatory’s Symphony Band under the baton of Francisco Sevillá and with the Conservatory’s Flute Orchestra. As soloist and chamber music performer he has appeared on several occasions in different venues in Madrid such as the National Music Auditorium, the Casa de la Moneda, where he recorded the first movement of Mozart’s Flute Concerto No. 1 in G major in 2020, the Paco de Lucía Auditorium, the Casa del Reloj, the Sanchinarro Cultural Centre and the Templete del Retiro, and in Valencia at the Unión Musical de Llíria, among others.

He is a member of the Atlántida Symphony and Chamber Orchestra conducted by Manuel Tévar since the year 2018, with which he has given concerts at the National Music Auditorium and in towns such as Alcalá de Henares, Ávila and Segovia.

As a student of the School, he has performed within the World Heritage Cities series in Salamanca. He is a member of the Barroco and the Françaix ensembles, as well as that of the Esferas Quintet.