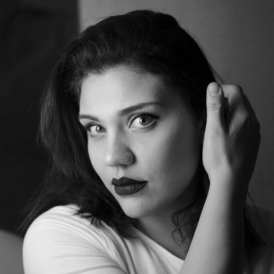 Born in Cartagena, Spain, in 1996. Since 2020, she studies at the Reina Sofía School of Music’s Fundación Ramón Areces “Alfredo Kraus” Voice Chair, currently with professor Susan Bullock CBE. She has been granted a scholarship by Fundación Albéniz.

She began her music studies at the Narciso Yepes Professional Music Conservatory of Lorca in the modalities of oboe and singing. She later studied with professor Gloria Fabuel at the Joaquín Rodrigo Conservatory of Music in Valencia. She has also studied actoral training with Alejandro Carvallo. She has attended masterclasses by Ana Luisa Chova, Giulio Zappa, Alessandro Amoretti, and Cristóbal Soler, among others.

She was awarded first prize at the 18th edition of the Entre Cuerdas y Metales Competition in Cartagena (2015) and was finalist at the 4th Albox Song and Lied Competition (2018), as well as at the Spanish Young Musicians Competition in the singing category (2019).

She has starred in the recovery of the work “Marinada” by Vicent Garcés at Sala Iturbi of Valencia’s Palau de la Música, where she has also played Mercedes in Bizet’s opera “Carmen” (2019). She has also performed in opera and zarzuela recitals in Valencia, both at the Palau de la Música (2019), as well as at the Palau de Les Arts (2020). In 2021 she was selected to participate in the "Crescendo: Creamos Ópera, Voces Reales” programme, organised by Fundación Amigos of Madrid's Teatro Real.

As a student of the School, she is currently a member of the Fundación Orange Voces Tempo Ensemble.