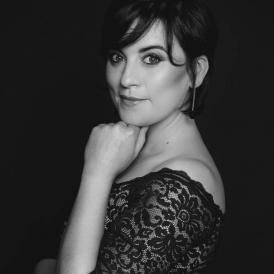 Mezzo-soprano Olga Syniakova was born in Dnipró, Ukraine. Since 2019, she studies at the Reina Sofía School of Music’s Fundación Ramón Areces “Alfredo Kraus” Voice Chair, currently with professor Susan Bullock CBE. She has been granted a scholarship by Fundación Albéniz.

In 2013 she completed her studies in Music Education at the Glinka Conservatory in Dnipró (Ukraine) and during her last year she was invited to play the role of Cherubino in “Le Nozze di Figaro”. She has also studied for two years at the Plácido Domingo Centre Perfeccionament in Valencia. Thanks to this, in 2018 she performed at the Palau de les Arts the roles of Ernesto in “Il mondo della Luna” and Second Lady in “Die Zauberflöte”; in 2019 she was Laura in “Iolanta”; Contessa di Ceprano in “Rigoletto” and Alisa in “Lucia di Lammermoor”. She has worked with directors Graham Vick, Mariusz Trelinski, Emilio Sagi, and Jean-Louis Grinda. In 2019 she also performed the role of Anfinomo in “Il Ritorno d’Ulisse” of Monteverdi, under the baton of Fabio Biondi at Hamburg’s Elbphilharmonie (Germany). She has performed with the same conductor and the Europa Galante Orchestra Rossini’s Petite Messe Solennelle at the Palau de les Arts of Valencia and at the Musikfest Bremen (Germany). In 2020 she performed the role Orphée (“Orphée et Eurydice”) at the Royal Philharmonic of Galicia’s concert version. Among her 2021 commitments, it is worth highlighting her recent involvement in the Castell de Peralada Festival in Girona.

As a student of the School, she has attended masterclasses by Konrad Jarnot and Francisco Araiza and, during the Santander Encounter of Music and Academy by John Graham-Hall. She has performed within the World Heritage Cities series in Ibiza. She has also been a member of the Fundación Orange Voces Tempo Ensemble.