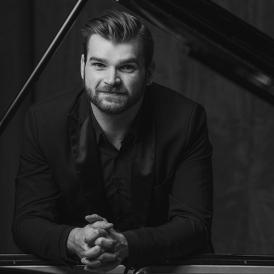 Born in São Miguel, Azores Islands, Portugal, in 1996. Since 2021 he studies at the Reina Sofía School of Music’s Fundación Banco Santander Piano Chair with professor Milana Chernyavska. He has been granted scholarships by Santander Portugal and Fundación Albéniz.

He began his studies at the age of 5 with his mother, Cristina Pliousnina. He graduated from the Royal Conservatory of Brussels, where he studied with Daniel Blumenthal, and also pursued studies at the Queen Elisabeth Music Chapel with Maria João Pires. He has attended masterclasses by Dmitri Bashkirov, Leonid Margarius, Sergei Edelman, Philippe Entremont, Markus Groh, Michel Béroff, Stanislav Ioudenitch, Rena Shereshevskaya, and Elisabeth Leonskaja. In addition, he had the opportunity of performing for Queen Mathilde of Belgium during one of her visits to the Conservatory of Brussels.

As a student of the School, he has performed within The Rising Generation series at the National Auditorium, and he is a member of the KPMG Schubert Ensemble.