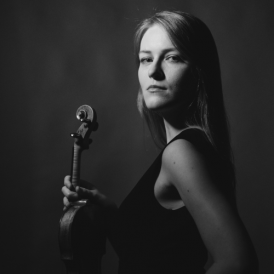 Born in Šiauliai (Lithuania) in 1995. From 2011 to 2015 she studied at the Cologne School of Music and Dance (Germany) with professor Zakhar Bron and, since 2015, she studies at the Reina Sofía School of Music’s Telefónica Violin Chair with Zakhar Bron (except for the 2019-2020 academic year). She has been granted a scholarship by Fundación Albéniz. In 2018 Her Majesty Queen Sofía handed her the Diploma to the most outstanding student of her chair.
She has been awarded several prizes in national and international competitions, including the Karol Lipinski and Henryk Wieniawski (Poland, 2012), first prize at the Pedro Bote Competition (Spain, 2016), and first prize at the 16th Intercentros Melómano Competition (Spain, 2017). She has received the Queen Marta of Lithuania Award (2007) and was granted a scholarship by Mstislav Rostropovich Foundation (2007-2011).
She has performed in several festivals and concerts, mainly in Europe, including her debut at Berlin’s Philharmonic, Cologne’s Philharmonic, Madrid’s Teatro Monumental, and Rotterdam’s De Doelen. As soloist, she has collaborated with orchestras such as RTVE, Symphony Orchestra of Extremadura, and Moscow’s Virtuoso Chamber Orchestra.
Additionally, she devotes a great deal of her time to chamber music, for which she has recently obtained a scholarship from Sociedad de Artistas, Intérpretes o Ejecutantes (AIE). Since 2018, she has been full member and concertmaster of the ADDA Symphony Orchestra of Alicante, and since the 2019 season, she is a teacher at the Spanish National Orchestra.
As a student of the School, she is part of the Sibelius Duo.