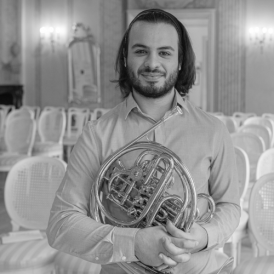 Born in Porto (Portugal) in 1998. Since 2020, he studies at the Reina Sofía School of Music’s Fundación ”la Caixa” Horn Chair with professor Radovan Vlatkovi&#263;. He has been granted a scholarship by Fundación Albéniz.
He began his music studies at the age of 10 with professor Ricardo Matosinhos. In 2011 he was admitted to the Conservatory of Music in Braga (Portugal), where he studied with Nelson Braga. In 2016 he started his degree in music at the School of Music and Performing Arts in Porto (Portugal) in the class of professors Bohdan Sebestik and Nuno Vaz. During this period, he was an Erasmus student during one semester at the Felix Mendelssohn Bartholdy University of Music and Theatre in Leipzig (Germany), where he studied with Thomas Hauschild.
In 2017 he was accepted into the Galician Youth Symphony Orchestra and in 2018 he participated in the Gustav Mahler Academy. In 2020 he was selected by the Gustav Mahler Youth Orchestra. In addition to collaborating with youth orchestras, he regularly does so with other professionals in Portugal and Spain. He won first prize in the junior category at the 12th Sopros Terras La-Salette International Competition (2017, Portugal), first prize ex-aequo at the Verão Clássico Festival (2018, Portugal), and third prize ex-aequo in the B Category at the CIT International Competition in Madrid (2016).
As a student of the School, he is a member of the Esferas Ensemble.