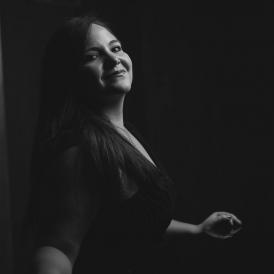 Born in Barranquilla (Colombia) in 1988. Since 2017, she studies at the Reina Sofía School of Music’s Fundación Ramón Areces “Alfredo Kraus” Voice Chair with professor Ryland Davies. She has been granted tuition and accommodation scholarships by Fundación Mario Santo Domingo.

In 2016 she was finalist at the course for young lyric singers, organised by the Plácido Domingo Centre de Perfeccionament in Valencia. She has performed several operatic roles such as Dido in “Dido and Eneas”, Rosalinda in “Die Fledermaus”, Princess and Chipmunk in “L’enfant et les sortileges”, Magda in “La Rondine”, Amelia in “Amelia al Ballo”, Susanna and Barbarina in “La nozze di Figaro”, Countess in “Black, el payaso”, and Adina in “L’elisir d’Amore”. In 2011 she participated in the Viva Madrid production at the Teatro Mayor Julio Mario Santo Domingo in Bogotá, under the baton of maestro Miguel Roa. In 2019 she went back to the same theatre to offer a lyric gala. She has also performed at the Opera of Colombia (2012), at the Central University opera workshop (2013) and at the Teatro Colón in Bogotá (2014).