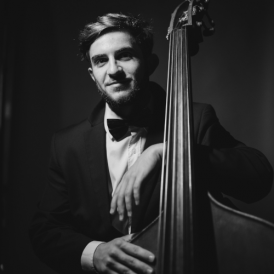 Born in Tavernes de la Valldigna (Spain) in 1999. Since 2020, he studies at the Reina Sofía School of Music’s Unidad Editorial Double Bass Chair with professor Duncan McTier. He has been granted a scholarship by Fundación Albéniz.

He began his double bass studies at the Cullera Professional Conservatory in 2007. He then started a degree at the Conservatory of Music in Alicante, and in 2017 he was granted a scholarship under the Erasmus programme, which led him to study at the San Pietro a Majella Conservatory in Naples (Italy). He finished his degree in music in 2019. Furthermore, he has attended masterclasses by Dorin Marc.

In 2016 he was awarded second prize at the Lions Club International Young Performers Competition (Spain). He has been part of the Spanish youth orchestras of the Valencian Regional Government and that of the Symphony Orchestra of the Music Societies Federation of such area, as well as that of the Ostrava New Orchestra (Czech Republic) and the Italian Orchestra Cinema.

In February 2019 he was selected as tutti for the Philharmonic Orchestra of the Festival Pianístico in Brescia and Bergamo (Italy) and as double bass academician at the Symphony Auditorium of the Alicante Provincial Council.

As a student of the School, he is a member of the Unidad Editorial Dittersdorf Double Bass Quartet.