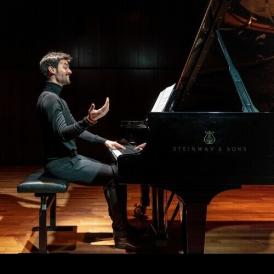 Born in Madrid, Luis began his music studies in his hometown with Rosalía Pareja and Javier Rovira. He furthered his studies at the Madrid’s Royal Conservatory of Music with Joaquín Soriano and Ana Guijarro and, for four years, at the Reina Sofía School of Music with Galina Eguiazarova, Marta Gulyás and Luis Fernando Pérez. He has been granted scholarships by several institutions such as Ibercaja, Fundación Albéniz, AIE, Madrid’s Juventudes Musicales of the Community of Madrid.
He is regularly requested to collaborate with other musicians and ensembles, having performed in several important Spanish venues such as Madrid’s National Auditorium, Teatro Real, Teatros del Canal, Barcelona’s Palau de la Música and Malaga’s Edgar Neville Auditorium. He has also performed in several countries such as Italy, Mexico, France, Israel, Germany, Sweden and Serbia. He has collaborated with orchestras such as the Freixenet Orchestra, Madrid’s Symphony Orchestra, and Castilla León’s Symphony Orchestra. He has participated in festivals and concert series such as AIE “Clásicos en Ruta”, the Santander Encounter of Music and Academy, FIT Xixona, Juan Gual I Esteve Festival, and Padova’s Barco Teatro Festival. He has recorded his first CD together with flautist Alberto Navarra, for Falaut magazine.
In his teaching capacity he has worked at Pamplona’s Pablo Sarasate Conservatory, Navarra’s Conservatory of Music, Castilla León’s Conservatory of Music, and Madrid’s Royal Conservatory of Music. He currently combines his concert activity with his teaching at Madrid’s Alfonso X El Sabio University and at the Reina Sofía School of Music as accompanying pianist professor in the Flute Chair, the IF International Foundation Trumpet Chair, and the Horn Chair.