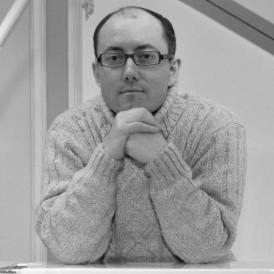 He was born in Kiev (Ukraine). He graduated with Honors from the P.I. Tchaikovsky National Academy of Music in Ukraine, and between 1995 and 1998, he completed his education in the Fundación Banco Santander Piano Chair at the Reina Sofía School of Music with Professor Dimitri Bashkirov. In 1997 and 1998 he was handed in by HM Queen Sofía the Diploma to the most outstanding student of his chair.
He currently is Accompany Piano Professor at the Violin Chair of that School.
He has won several international prizes; such as the IX Ciudade do Porto Piano Competition, I “N. Lysenko” International Competition in Kiev, “Minsk Springtime” Piano Competition, VII Grieg International Competition in Oslo, IX “José Iturbi” Competition in Valencia, III “Premi Principat d’Andorra Competition, among others.
He has offered concerts in Ukraine, Germany, Portugal, Spain, Switzerland, Japan, France, Mongolia, The Netherlands, Norway, United Kingdom, Italy