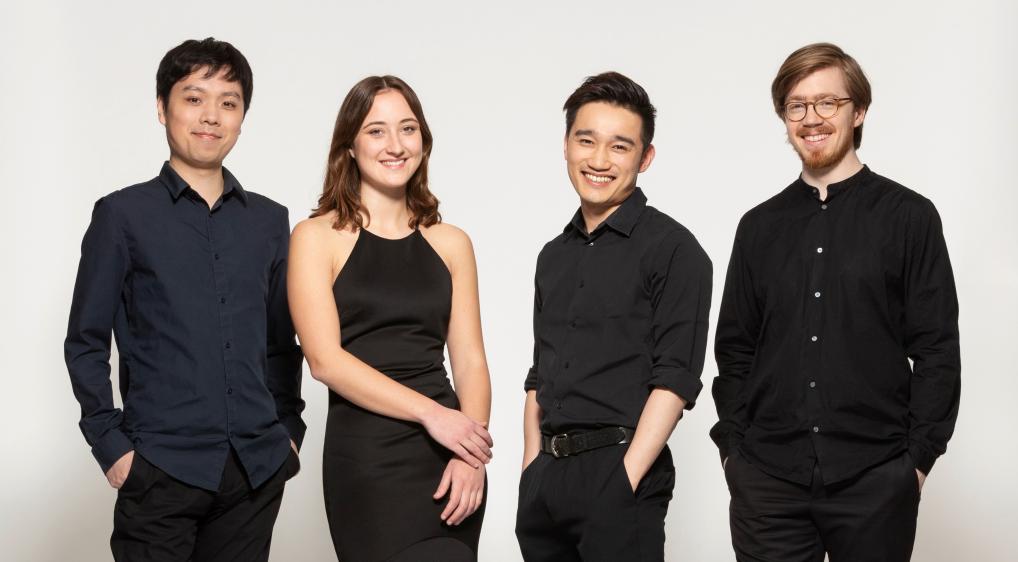 The Simply Quartet was founded in Shanghai in 2008 under the tutelage of Prof. Jensen Horn-Sin Lam. Originally an all-Chinese quartet, the group’s musical journey took it to Vienna in 2012. This resulted in a change in formation, in which two of the original players Danfeng Shen (violin) and Xiang Lu (viola) were joined by Norwegian cellist Ivan Valentin Hollup Roald (in 2016) and Austrian violinist Antonia Rankersberger (in 2018). They are currently studying with Prof. Johannes Meissl (Artis Quartet) at the Joseph Haydn Institute for Chamber Music at the University of Music and Performing Arts in Vienna.

Currently based in Vienna, the quartet has been focusing on the roots of the German and Austrian string quartet repertoire for the past few years. This is reflected in the group’s recent successes at two major international competitions. At the 2017 Haydn Competition in Vienna they were awarded First Prize in addition to the special prizes for the best interpretation of a work by Joseph Haydn, and for the best interpretation of the competition’s commissioned work. In February 2018 they won the First Prize in the International “Schubert and Modern Music” Chamber Music Competition. They have also given several concerts in the Haydn and Beethoven Houses in Vienna and in Baden, as well as in the Lower Austrian “Haydn Region”.

In addition to working on the major string quartet repertoire, the quartet is exploring new music from their member countries China, Austria and Norway. They also performed the premiere of Brad Lubmans’ string quartet Fleeting Moments at the Grafenegg Festival in 2017.

The Simply Quartet is becoming more and more active in the chamber music scenes in Europe and China, and especially in Austria. The last seasons have included performances at venues like the Wiener Musikverein and Konzerthaus, the Berlin Konzerthaus, the Stefanien Hall in Graz, Wigmore Hall in London, Kamermuziek Souvenir in Tilburg, the Emergents Festival in Barcelona, the Casa da Musica in Portugal, the Rachmaninov Hall in Moscow and the Vatican Museum. They also played at festivals such as the Pablo Casals Festival, the Shanghai Chamber Music Festival, the Styrian Chamber Music Festival, Allegro Vivo in Lower Austria (Waldviertel) and the Ghent Festival in Belgium.

The 2019/20 concert season will include performances at the Wigmore Hall (ECMA showcase), Banff Center of the Arts, the Concertgebouw Amsterdam, the Februari Festival in The Hague, the Wiener Musikverein and Konzerthaus, MuTh in Vienna, and concerts throughout Austria in connection with Jeunesses Musicales, as well as for the Italian Jeunesse Musicales with concerts in Bergamo, Milano, Modena and Fermo.

At the international string quartet competition “Quatuors á Bordeaux” in June 2019, the Simply Quartet was awarded the Grand Prix, which contains a three years world tour arranged by the CLB Management and Künstleragentur Vivace.
The Simply Quartet has also played music arranged with a new approach to music in mind. In 2017 they took part in the Musethica Festival in Zaragosa and Vienna, where they played at institutions such as schools for special needs pupils, prisons, homeless shelters and adult education centres in addition to traditional concert venues. At the Concert House in Vienna they performed for children and young adults. This included a concert with beatboxing artist RoBeat.

The Simply Quartet became a member of ECMA (the European Chamber Music Academy) in 2017. Within this context, they travel to sessions all over Europe and are given an opportunity to work intensively with teachers such as Hatto Beyerle (Alban Berg Quartet), Alfred Brendel, Avedis Kouyoumdjian, Patrick Jüdt, Miguel Da Silva, Antonello Farulli and Michel Lethiec, in addition to being able to participate in numerous exciting workshops and enjoy lessons with Gerhard Schulz (Alban Berg Quartet).