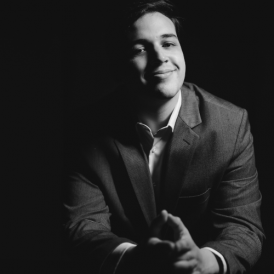 Born in Río Gallegos, Argentina, in 1993. Since 2020, he studies at the Reina Sofía School of Music’s Fundación Ramón Areces “Alfredo Kraus” Voice Chair, currently with professor Susan Bullock CBE. He has been granted scholarships by Altamira-Lar and Fundación Albéniz.

He began studying piano in Santa Cruz. At the age of 17, he moved to Buenos Aires, where he completed a bachelor’s degree on Composition at the Catholic University, obtaining the highest qualifications in his thesis and studying lyrical singing at the same time. In 2015 he participated in the Savannah Voice Festival, attending masterclasses by baritone Sherril Milnes. He made his debut as soloist tenor with Bach’s “Magnificat” at Usina del Arte and he entered the Teatro Colón Higher Institute of Arts. He made his professional operatic debut in 2017 with “La Grotta di Trofonio” for Chamber Opera at the Teatro Colón, “L’incoronazione di Poppea” as Lucano, and “Ba-ta-clan" by Offenbach for Buenos Aires Lírica. In 2021 he was one of the winners of the 15th Mirna Lacambra Escola d’Òpera Competition in Sabadell for his role in Il Conte di Almaviva, from Rossini’s “Il barbiere di Siviglia”.

As a student of the School, he has attended masterclasses by Adrian Thompson, and he has been soloist with the Sinfonietta under the baton of Johannes Kalitzke. He is currently a member of the Fundación Orange Voces Tempo Ensemble.