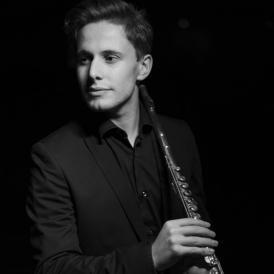 Born in Mondovì (Italy) in 1997. Since 2019, he studies at the Reina Sofía School of Music’s Flute Chair with professor Jacques Zoon. He has been granted scholarships by Francesco and Marina Moncada di Patterno and Fundación Albéniz.
In 2008 he began his flute studies with Andrea Manco. In 2017 he completed the degree in flute music with the highest qualifications and under the guidance of Maurizio Valentini. He furthered his training through a Master’s degree in chamber music at the Ghedini Conservatory. He has also studied with Andrea Oliba at the Imola Academy and the Santa Cecilia Academy in Rome. He has attended masterclasses by Claudio Montafia, Emmanuel Pahud, Sébastian Jacot, and Silvia Careddu.
He has been awarded first and second prizes in national and international competitions, including the European Classical Music Competition in Moncalieri, the Versilia Riviera in Viareggio, the Krakamp, and the Competition of the City of Chieri. He has been part of several chamber groups and has performed as soloist in many concerts and festivals.
As a student of the School, he has been part of the Fundación Mutua Madrileña Ensemble and is currently a member of the Zéphyros Quintet and the Telemann Ensemble.