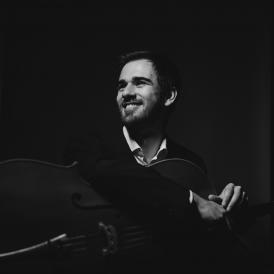 Born in Madrid, Spain, in 1996. Since 2014, he studies at the Reina Sofía School of Music’s Aline Foriel-Destezet Cello Chair with professor Ivan Monighetti. He has been granted scholarships by Consejería de Educación, Universidades y Ciencia de la Comunidad de Madrid and Fundación Albéniz. Her Majesty Queen Sofía handed him the Diploma to the most outstanding student of his chair in 2016, 2017 and 2019, as well as the 2019 Mention to the most outstanding chamber group in the piano category in 2019, as a member of the Contrastes Ensemble.

He studied with Victoria Rodríguez at the Padre Soler Conservatory in San Lorenzo de El Escorial (Madrid), where he graduated in 2013 with a special prize in cello. Meanwhile, he also studied with María de Macedo and later with Lluís Claret. He has attended masterclasses by Israel Fausto Martínez, Damián Martínez, Raphaël Pidoux, Christophe Coin, Jean-Guien Queyras, Christophe Henkel, Daniel Grosgurin, Stephan Forck, Amit Peled, Gary Hoffman, Wolfgang Emanuel Schmidt, Claudio Bohórquez, Torleif Thedéen, Gautier Capuçon, Asier Polo, Alban Gerhardt, and Ralf Gothóni. He has been awarded first prize in several competitions, including the Jaime Dobato Benavente in Alcañiz (Teruel) in 2011, the Liezen (Austria), and the Antonio Janigro (Croatia) in 2012, where he also received the special prize of the Soloists of Zagreb, and the Llanes Cello Competition in 2018. He has also been awarded in Liezen in 2010 and in the Davidoff in 2014 (Latvia), where no one won the first prize, allowing him to perform as soloist with the Liepaja Symphony Orchestra. He has also played solo with the Andrés Segovia Chamber Orchestra, the Soloists of Zagreb, and Málaga’s Philharmonic Orchestra.

As a student of the School, he has been part of the Freixenet Symphony Orchestra (conducted by Josep Pons, Jaime Martín, Antoni Ros-Marbà, Plácido Domingo, Pablo Heras-Casado, Juanjo Mena, Stefan Lano, Zubin Mehta, Péter Eötvös,and Pablo González) and has been soloist with such orchestra under the baton of Andrés Orozco-Estrada and David Afkham. In 2021, he took part in the 30 Anniversary Tour of the School with the Freixenet Symphony Orchestra, conducted by Andrés Orozco-Estrada, performing at Teatro Real of Madrid, Reduta Hall of Bratislava, Liszt Ferenc Academy of Budapest and Musikverein of Vienna.
He has also been a member of the BP Mendelssohn and Stoneshield quartets, the Widmann Octet, as well as that of the Banco Universal Esferas, Banco de España Arriaga and Contrastes ensembles. He is currently part of the Enagás Schumann Trio and the Deloitte Mozart Trio, with whom he has been awarded the 2020 Mention to the most outstanding chamber group with piano.

He plays a model Testore G. Sgarabotto cello, loaned as an instrument scholarship by Lutheria Tarapiella.