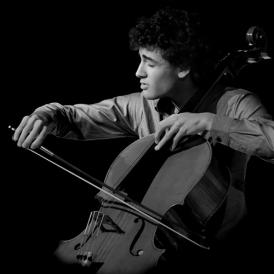 Alex Olmedo Duynslaeger started his cello studies with Gaëtane Duynslaeger at the IEA Oriol Martorell in Barcelona. He was later granted the Jóvenes Promesas scholarship by Fundación Ferrer-Salat to continue his higher education with Lluís Claret at the Liceu Conservatory of that same city. Additionally, he has won several national competitions such as the Jaime Dobato Benavente in 2017 and international such as the Concours Edmond Baert in Brussels in 2018. He has performed concerts as soloist with the Orquesta del Real Círculo of Barcelona, Orquesta de Cámara of Sant Cugat, and the Orquesta Italiana Bazzini Consort. He is currently studying the Master’s Degree in Performance at the National Conservatory of Music and Dance in Paris with professor Raphaël Pidoux.