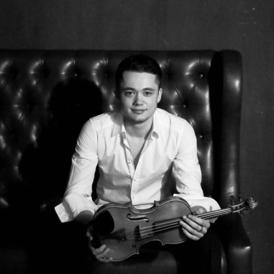 Alexey Stychkin is a Russian - Greek violinist. He started his violin studies at the age of 5 with Galina Tourchaninova. Since 2017 he has been studying with Marc Bouchkov in Liege Royal Conservatory. In 2014 he was awarded a special prize in the Andreas Postacchini competition. That year he toured in Italy with the Rotary club. Years later, he won 3rd prize on the International Tchaikovsky Competition for young musicians, receiving a special prize for the best Mozart performance, and debuted in the Big Hall of Moscow Conservatory with a symphonic orchestra and ended the year playing Sibelius concerto with GUSO orchestra in Belgium. In 2019 Alexey performed for the Queen Mathilde of Belgium and took part in Leopold Auer festival with Kristof Barati. 2020 started with Tchaikovsky violin concerto under the baton of maestro Fabio Mastrangelo and the Russian Philharmonic orchestra. Shortly after that Alexey won the 3rd and the public price on Henry Vieuxtemps competition in Belgium. Alexey regularly performs in countries such as Belgium, France, Italy, Germany, Greece, Israel.
He takes part in masterclasses with Pavel Vernikov, Victor Tretyakov, Boris Kushnir, Ivry Gitlis, Mauricio Fuks, Michaela Martin, among others. Besides solo performances, Alexey is eager to participate in chamber music projects and play in the orchestra.
In 2021 he received a scholarship in Villa Musica Academy and had a concert tour as concertmeister of Klassische Philarmonie Bonn. In 2022 he has also received an academy position in the first violin section in the Staatskapelle Berlin and will start his internship under the baton of Maestro Daniel Barenboim in the beginning of next season.