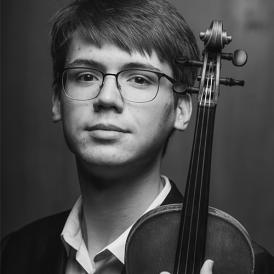 Born in Kiev, Ukraine, in 2003. Since 2021, he studies at the Reina Sofía School of Music’s Telefónica Violin Chair with professor Zakhar Bron. He has been granted a scholarship by Fundación Albéniz. He plays a Jan Pawlikowski violin made in Krakow in 2016, loaned as an instrument scholarship by Sara Dragan.

He started his violin studies at the age of 8 in his hometown with A. Batkovsky and piano with T. Tseneva. He graduated from high school in 2019 as the most distinguished student in his class. In the 2020-2021 academic year he was a student at the Madrid Royal Conservatory.

He has been awarded several prizes in competitions such as the Classic Meridian in Ukraine (2014, 2015, 2016) where he was awarded second prize, the Spring Kaleidoscope in 2015 where he also won the second prize, and the Young Virtuoso in 2015, where he won the third prize. He has also won first prizes in festivals such as the Art Palette Festival in 2016 and the String Gold Stars in 2017.

As a student of the School, in 2021 he participated in the 30th anniversary tour of the School with the Freixenet Symphony Orchestra, conducted by Andrés Orozco-Estrada, with whom he performed at Madrid's Teatro Real, at Bratislava's Reduta Hall, at Budapest's Liszt Ferenc Academy and at Vienna's Musikverein. He is currently a member of the Cremona Duo.