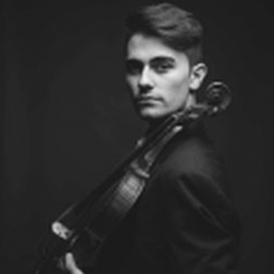 Born in Murcia, Spain, in 1999. Since 2017, he studies at the Reina Sofía School of Music’s Fundación BBVA Viola Chair with Professor Nobuko Imai. He has been granted a scholarship by Fundación Albéniz.

He began his viola studies in 2007 at the Professional Conservatory of Murcia with Antonio Clares, where he graduated with honours in all courses. He later entered the Alter Musici Music Studies Center, where he studied with Ashan Pillai. He has attended courses and masterclasses from Alan Kovacs, Joaquín Riquelme, Michael Gieler, Avri Levitan, Ashan Pillai, Pauline Sachse, Hariolf Schlichtig, Tabea Zimmermann, and Antoine Tamestit. He has been awarded several times including first prize at the Molina Competition (2012 and 2014), third prize at the “Entre Cuerdas y Metales” Competition (2015 and 2016), first prize at the Summa Cum Laude Competition, along with the Regional Youth Orchestra of Alicante at the Musikverein (2015) and third prize at the Llanes International Viola Competition (2016). He has also won the first prize, in its regional category, as well as second prize and award to the Best String Performer, in its national category, at the Intercentros Competition (2016). In addition to these, he has also been awarded third prize at the 17th Intercentros Melómano International Performance Competition (2018). In 2016 he was selected by the Talents Project of Madrid’s Symphony Orchestra to perform with its soloists at the Teatro Real. He has participated in chamber groups and orchestras, including the Youth Orchestra of the Region of Murcia, Murcia’s Camerata, Youth Orchestra of the Province of Alicante, Orchestra of the University of Murcia, Forum Musikae Orchestra and Elche’s Symphony Orchestra.

As a student of the School, he has been part of the Freixenet Symphony Orchestra, conducted by Jaime Martín, Plácido Domingo, Andrés Orozco-Estrada and Víctor Pablo Pérez as well as with the Sinfonietta under the baton of Johannes Kalitzke. In 2021 he participated in the 30th anniversary tour of the School with the Freixenet Symphony Orchestra, conducted by Andrés Orozco-Estrada, with whom he performed at Madrid's Teatro Real, at Bratislava's Reduta Hall, at Budapest's Liszt Ferenc Academy and at Vienna's Musikverein. He has also been a member of the Stoneshield Quartet and the Management Solutions Tchaikovsky Ensemble. He is currently part of the Banco de España Arriaga Quartet.