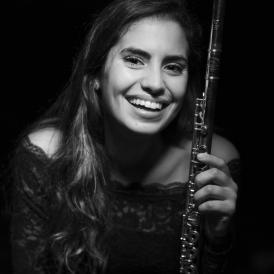 Born in Maia, Portugal, in 1995. Since 2019, she studies at the Reina Sofía School of Music’s Flute Chair with Professor Jacques Zoon. She has been granted scholarships by Fundación EDP and Fundación Albéniz.

In 2016 she graduated from the Geneva University of Music, where she studied with Professor Michel Bellavance, obtaining the highest qualifications. She later completed a master’s degree with Julien Beaudiment at the Conservatory of Lyon. She furthered her studies with Vicenç Prats at the School of Music of Catalonia. She has attended masterclasses by Emmanuel Pahud, Jaime Martín, and Matthew Wilkie (wind ensembles), among others. She has been awarded first prize at the 20th Performance Competition of Estoril (2018) and at the Santa Cecilia International Music Competition. She has also been awarded twice at the Jastrzebie-Zdroj International Flute Competition in Poland.