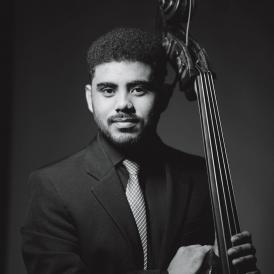 Born in Sincelejo, Colombia, in 1995. Since 2018, he studies at the Reina Sofía School of Music’s Unidad Editorial Double Bass Chair with professor Duncan McTier. He has been granted scholarships by Fundación Santo Domingo and Fundación Albéniz. He plays a Tyrolean double bass from the 19th century, loaned as an instrument scholarship by Fundación Albéniz.

He has been awarded first prize at the 10th edition of the Young Soloists Competition in tribute to J. S. Bach at the University of Antioquia. He has participated in the gala of young talents of the Medellín Philharmonic and has been a scholar of the Cartagena Classical Music Festival (2015). He has also taken part in festivals including Young Euro Classic and Rheingau Music Festival, Classical Criterion Series, Cartagena Festival, and the Santander Music and Academy Encounter, among others.

He has performed at the Vienna Opera, Berlin Theatre, Jones Hall, and New World Center (USA), collaborating with orchestras such as the Vienna Philharmonic, Houston, New World, Switzerland’s Winterthur, and Medellín’s Philharmonic. He has also worked with soloists Cecilia Bartoli and Johannes Moser. He has been a member of the Ibero-American Philharmonic Academy, the Youth Philharmonic of Colombia, and the Symphony Band of the University of Antioquia.

As a student of the School, he has been part of the Freixenet Symphony Orchestra, conducted by Andrés Orozco-Estrada, Víctor Pablo Pérez, Péter Eötvös and Pablo Heras-Casado, and that of the Sinfonietta under the baton of Johannes Kalitzke. In 2021 he participated in the 30th anniversary tour of the School with the Freixenet Symphony Orchestra, conducted by Andrés Orozco-Estrada, with whom he performed at Madrid's Teatro Real, at Bratislava's Reduta Hall, at Budapest's Liszt Ferenc Academy and at Vienna's Musikverein.
He has been a member of the Unidad Editorial Bottesini Double Bass Quintet and that of the KPMG Schubert Quintet, with whom he obtained the 2021 Mention to the most outstanding chamber group in the category of groups with piano. He is currently part of the Unidad Editorial Dittersdorf Double Bass Quartet and the Ramales Quartet.