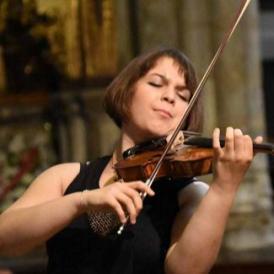 Born in Lyon (France) in 1995. She began her violin studies at the Regional Conservatory of Lyon, before joining Mihaela Martin at the Geneva University of Music (Switzerland) in 2014. It was in Geneva where she had the opportunity to work in chamber music with Gábor Takács-Nagy and Jean-Jacques Balet. In 2017 she was admitted in the Cologne University of Music (Germany) with Mihaela Martin. She has been able to work, attend masterclasses or perform with artists including Frans Helmerson, Zakhar Bron, Latica Honda-Rosenberg, Péter Frankl, Kyoko Hashimoto, Krzysztof Penderecki and Vadim Neselovskyi. Since 2020, Anna has been a member of the Orchesterzentrum|NRW in Dortmund (Germany). She was also a member of the Mahler Chamber Orchestra Academy and was able to play as a guest orchestra member.