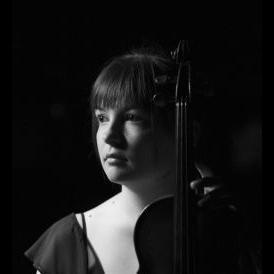 Born in Timişoara, Romania, in 2001. Since 2019, she studies at the Reina Sofía School of Music’s Telefónica Violin Chair with professor Zakhar Bron. She has been granted scholarships by Goldman Sachs and Fundación Albéniz. She plays an Alexander Hazin violin loaned as an instrument scholarship by Zakhar Bron

She started to play violin at the age of six at the Ion Vidu National School of Arts in Timişoara with Romanian-German violinist and professor Ioan Fernbach.

In addition to several recitals in Romania and abroad, she has given symphony concerts with the Ars Longa Orchestra, under the baton of Ilarion Ionescu-Galati, one at Arad’s State Theatre and the other one at Timisoara’s Banatul Philharmonic. She has also performed Bach’s Double Concerto for two violins in D minor with the Maggiore Orchestra.

As a student of the School, she has been a member of the Freixenet Symphony Orchestra, conducted by Pablo González, Pablo Heras-Casado and David Afkham. In 2021 she participated in the 30th anniversary tour of the School with the Freixenet Symphony Orchestra, conducted by Andrés Orozco-Estrada, with whom she performed at Madrid's Teatro Real, at Bratislava's Reduta Hall, at Budapest's Liszt Ferenc Academy and at Vienna's Musikverein.
She has been part of the Stoneshield Quartet and the Vivaldi Estaciones Ensemble and is currently a member of the Ramales Quartet.