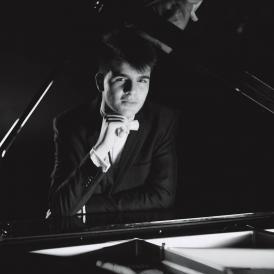 Born in Caravaca de la Cruz (Spain) in 2002. Since 2018, he studies at the Reina Sofía School of Music’s Fundación Banco Santander Piano Chair with professor Galina Eguiazarova. He has been granted a tuition scholarship by Fundación Albéniz.

In 2015 he was awarded second prize at the San Giovanni Teatino International Competition. In 2016 he won Segovia’s Santa Cecilia, Cáceres’ Esteban Sánchez and Jávea’s National Competitions. In 2018 he was selected best pianist in his category at the 16th Intercentros Melómano Competition. He has played in Austria (Brahmssaal of Vienna’s Musikverein), Netherlands, Germany, Italy and Switzerland, as well as in Madrid, Valencia (Palau de la Música) and Tarragona.

As a student of the School, he has been part of the Aegea Ensemble. He is currently a member of the KPMG Schubert Trio.