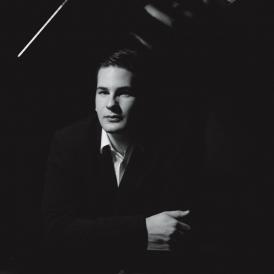 Born in Ajka (Hungary) in 1999. Since 2018, he studies at the Reina Sofía School of Music’s Fundación Banco Santander Piano Chair with professor Dmitri Bashkirov. He has been granted tuition and accommodation scholarships by Fundación Albéniz.

He started playing piano at the age of ten with Kinga Kovácsné Pogány and studied at the Richter Janos Secondary School of Music in Györ (Hungary). He has received masterclasses from Elisabeth Leonskaja, Eldar Nebolsin and Luis Fernando Pérez. In 2015 he was awarded first prize at the György Ferenczy National Piano Competition (Hungary) and in 2016 first prize at the 4th Ischia International Piano Competition (Italy). He has performed in recital at the Budapest Music Center.

As a student of the School, he has been part of the Google Da Vinci Ensemble and that of the Enagás Schumann Ensemble. He is currently a member of the Ramales Trio.