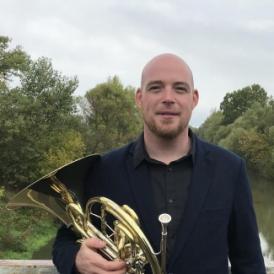 He was born in Budapest (Hungary) in 1992. He first became acquainted with music at age eight after meeting László Seeman, when he started playing horn. He furthered his training with Pálma Szilágyi and later on, he studied with Sándor Endrődy at the University of Győr and with Imre Magyari at the Franz Liszt Academy of Music in Budapest. He has been awarded several prizes, such as the International Horn Society “Dorothy Frizelle” Award (London, 2014), the third prize in the International Brass and Percussion Competition (Debrecen, 2014), and the second prize of XIX Concorso Internazionale di Musica per Giovani Interpreti “Citta di Chieri” (Chieri, Italy). Currently he is a player of Budafoki Dohnányi Ernő Symhpony Orchestra, Budapest.