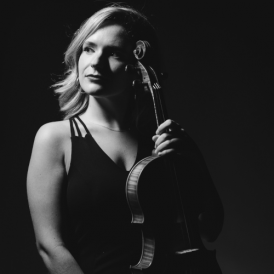 Born in Badajoz, Spain, in 1997. Since 2020, she studies at the Reina Sofía School of Music’s Fundación BBVA Viola Chair with Professor Diemut Poppen. She has been granted scholarships by Grupo Timón/Jesús de Polanco and Fundación Albéniz and she enjoys a Hugues de Valthaire instrument scholarship.

As a student of the School, she has been a member of the Freixenet Symphony Orchestra, conducted by Pablo Heras-Casado and David Aflham, as well as that of the Fundación EDP Camerata under the baton of Giovanni Guzzo and Paul Goodwin and at the Casa Museo de la Moneda in Madrid. In 2021 she participated in the 30th anniversary tour of the School with the Freixenet Symphony Orchestra, conducted by Andrés Orozco-Estrada, with whom she performed at Madrid's Teatro Real, at Bratislava's Reduta Hall, at Budapest's Liszt Ferenc Academy and at Vienna's Musikverein. She has been part of the Dvořák Quartet and the Saint-Saëns Ensemble. She is currently part of the Puertos del Estado Haendel Quartet.