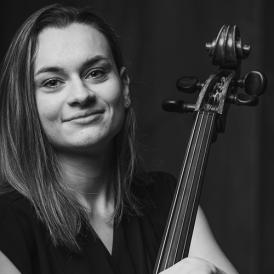 Born in Versailles, France, in 2003. Since 2021, she studies at the Reina Sofía School of Music’s Aline Foriel-Destezet Cello Chair with professor Ivan Monighetti. She has been granted a scholarship by Fundación Albéniz.

She began her cello studies at the age of 6 with Jacques Perrone at Menton’s Conservatory (France). In 2012 she entered, with a full scholarship, Cobham’s Yehudi Menuhin School (United Kingdom), where she studied with Bartholomew Lafolette and Thomas Caroll. Six months later she returned to Geneva, where she met Ivan Monighetti, who has been her professor ever since. She also attended masterclasses by professors Thomas Caroll, Martti Rousi, Alban Gerhardt, and Ralf Gothóni (groups with piano), among others.

She combines her music studies with teaching children at a small school in her home country.

As a student of the School, she has been part of the Sinfonietta under the baton of Johannes Kalitzke. In 2021 she participated in the 30th anniversary tour of the School with the Freixenet Symphony Orchestra, conducted by Andrés Orozco-Estrada, with whom she performed at Madrid's Teatro Real, at Bratislava's Reduta Hall, at Budapest's Liszt Ferenc Academy and at Vienna's Musikverein. She is also a member of the Schola and the Mistral Trios.