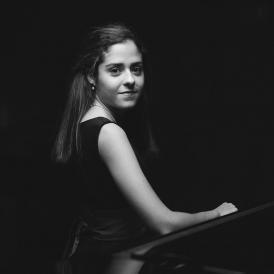 Born in Madrid, Spain, in 1999. Since 2017, she studies at the Reina Sofía School of Music’s Fundación Banco Santander Piano Chair with professor Galina Eguiazarova. She has been granted scholarships by Ayuntamiento de Madrid and Fundación Albéniz.

From 2007 to 2016 she studied the elementary and professional degrees at the Adolfo Salazar Conservatory with Nuria Guerras and Carlos Domínguez. As a student of the School, she has attended masterclasses by Jerome Rose, Eldar Nebolsin, Alexander Lonquich, Luis Fernando Pérez, Asier Polo, Rena Shereshevskaya, Ralf Gothóni, and Stanislav Ioudenitch. She has been awarded several first prizes in competitions including Polimúsica (2010, 2012, 2014 and 2015), Segovia’s Santa Cecilia (2013) where she also received the award for the best performer of Bach, and the special prize Trinity College London. In 2014 she obtained the first prize at Brussels’ César Franck and the Maese Pedro prizes, and in 2015 she was awarded at the Cardenal Cisneros Music Performance, Toledo’s Jacinto Guerrero, and Pescara (Italy) Competitions, the latter in its youth category. She has also been awarded second prize in the youth category of Granada’s María Herrero International Competition (2013), the ATCL Certificate by Trinity College London (2014), and the third prize at the Aquisgrán ClaviCologne (2015), where she performed Mozart’s Concerto for piano no. 12 in A major K. 414.

As a student of the School, she has performed with the Fundación EDP Camerata, conducted by Paul Goodwin. She has been part of the Bizet Duo and that of the Vivaldi Estaciones, Casa de la Moneda Scarlatti and the Banco Activo Universal Esferas ensembles. She is currently a member of the Zéphyros Sextet, the Saint-Saëns Ensemble and the Ambage Trio.