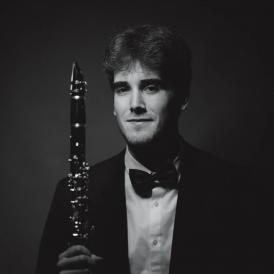 Born in Madrid, Spain, in 1999. From 2018 to 2022 he studied at the Reina Sofía School of Music’s Clarinet Chair with Pascal Moraguès, after having studied with Michel Arrignon. Her Majesty Queen Sofía handed him the Diploma to the most outstanding student of his chair in the 2018-2019 and 2020-2021 academic years.

As a student of the School, he has attended groups with piano masterclasses by Ralf Gothóni and during the Santander Music and Academy Encounter by François Benda, as well as Joan Enric Lluna. He has also been a member of the Freixenet Symphony Orchestra, conducted by Péter Eötvös and Pablo González, and that of the Sinfonietta under the baton of Jorge Rotter and Baldur Brönnimann. In 2021 he participated in the 30th anniversary tour of the School with the Freixenet Symphony Orchestra, conducted by Andrés Orozco-Estrada, with whom he performed at Madrid's Teatro Real, at Bratislava's Reduta Hall, at Budapest's Liszt Ferenc Academy and at Vienna's Musikverein. He has been part of the Bozza Quartet, the EY Ricercata Quintet, the Strauss Trio, the Fundación Mutua Madrileña and Gounod ensembles, the Ambage Ensemble, as well as the Zéphyros Quintet and Sextet.