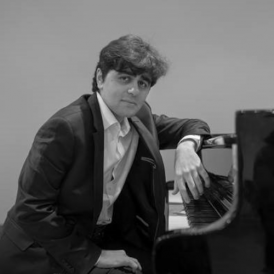 Born in Tbilisi, Georgia, in 2001. Since 2020, he studies at the Reina Sofía School of Music’s Fundación Banco Santander Piano Chair, first with professor Galina Eguiazarova and currently with professor Stanislav Ioudenitch. He has been granted scholarships by Jaime Castellanos and Fundación Albéniz. Her Majesty Queen Sofía handed him the Diploma to the most outstanding student of his chair in the 2021-2022 academic year.

He began to study piano at the age of eight at the Zakaria Paliasvhili Central Music School for gifted children in Tbilisi, which he left in 2019. He then continued his training with professor Revaz Tavadze. He has attended masterclasses by Arie Vardi, Elisso Virsaladze, Nelson Freire, Eugen Indjic, Stanislav Ioudenitch, Rena Shereshevskaya, Ralf Gothóni, and Elisabeth Leonskaja.

As a student of the School, he has been a member of the Banco de España Arriaga Ensemble. He is currently part of the Schumann Trio.