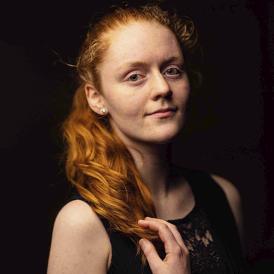 Born in Ukkel, Belgium, in 2002. At the age of six, she fell in love with violin and at nine, she started to perform a concert with an orchestra, which was followed by many others. Initially, she was guided by her professors Arman Simonyan and Ludwine Beuckels before finishing her studies with Erik Sluys at the Muziekacademie Anderlecht, and with Philippe Graffin at the Royal Conservatory of Brussels. She has received masterclasses from Miriam Fried, Shlomo Mintz, Gérard Poulet, Yossif Ivanov, Aleksey Semenenko, Tatiana Samouil, Judith Ingolfsson, David Waterman, and Mark Gothoni, among others. As chamber activity is concerned, her attention is directed towards the repertoire of the piano quartet and trio. She plays a Gand & Bernardel Frères violin, made in 1877 in Paris (France).