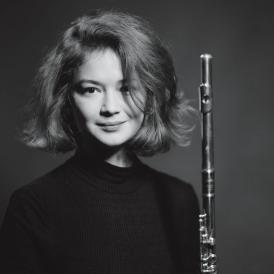 Born in Moscow (Russia) in 1995. Since 2018, she studies at the Reina Sofía School of Music’s Flute Chair with professor Jacques Zoon. She has been granted a scholarship by Fundación Albéniz.
In 2003 she began her flute studies at Moscow’s Central Music School under the guidance of Yury Doljikov. From 2013 to 2018, she studied at Moscow’s Conservatory with Alexander Golyshev. She has attended masterclasses by François Laurent, Felix Renggli, Vicens Prats, Davide Formisano, Vincent Lucas, Kersten McCall, Andrea Lieberknecht, Shigenori Ku, and Emmanuel Pahud.
She has participated, from an early age, in international festivals (Berlin, Paris and Mozart’s Festival, among others), as well as in orchestras and chamber groups, including the Voronezh Symphony Orchestra, Philharmonic Orchestra of Gomel, State Symphony Orchestra of Moscow, Chamber Orchestra of Vienna, Chernigov Symphony Orchestra, Moscow’s Virtuosi, and Orchestra of the Viennese Concerts Association. She has also performed as soloist in Greece and Italy, as well as with Russia’s National Philharmonic Orchestra.
As a student of the School, she has been part of the Freixenet Symphony Orchestra, conducted by Péter Eötvös, and has been a member of the Fundación Mutua Madrileña Ensemble. She is currently part of the Barroco Ensemble. She plays a flute gifted by violinist Vladimir Spivakov.