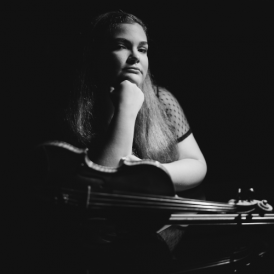 Born in Kingston, Jamaica, in 2000. Since 2010 she studies at the Reina Sofía School of Music’s Telefónica Violin Chair with professor Zakhar Bron, having received the Diploma to the most outstanding student of her chair in 2021. She has been granted scholarships by Helena Revoredo and Fundación Albéniz.

She has been awarded first prizes at the Debut Berlin Competition (2017), at the Novosibirsk Competition (Russia, 2016), where she also received the award to be best performance of a Russian contemporary piece, and at the Wieniawski for young violinists (Poland, 2012).

As a student of the School, she has performed as soloist with the Freixenet Symphony Orchestra, under the baton of maestros Maximiano Valdés, Stefan Lano, Jaime Martín, Vladímir Spivakov, Zubin Mehta and Pablo Heras-Casado, as well as with the Viesgo Camerata conducted by Anne-Sophie Mutter. She has been a member of the Stoneshield Quartet, the Amadeus Ensemble, and the Ramales Trio. She is currently part of the Google Da Vinci Ensemble.