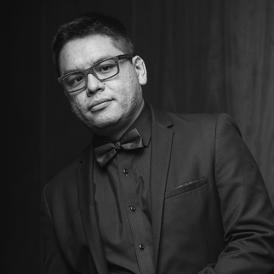 Born in Mexico City, Mexico, in 1995. Since 2021, he studies at the Reina Sofía School of Music’s IF International Foundation Composition Chair with professor Fabián Panisello. He has been granted scholarships by Banco Santander México, MAEC/AECID and Fundación Albéniz.

He began his studies in a self-taught way at the age of 11. In 2014 he entered the Composition Workshop at Mexico City’s National Music Conservatory under the mentoring of Armando Luna Ponce and Juan Fernando Durán in composition and that of Mario Lavista in musical analysis. His professional training includes classes and courses by Alexis Aranda, Ignacio Baca Lobera, Sergio Cárdenas, Jorge Torres Saenz, Julio Estrada, Marcelo Toledo, and Javier Torres Maldonado, among others.

His works have been played at different venues such as Mexico City’s National Music Conservatory, the Centro Nacional de las Artes, the Faculty of Music at the National Autonomous University of Mexico, the Del Bosque Cultural Centre and the Alcazar Theatre at Chapultepec Castle’s National Museum of History.

In 2017, the album Ideogramas was released, in which he participates with the work “Descubrimientos en el repetido sueño de José” and that the Ónix ensemble recorded under the label Urtex Digital Classics. He was also a finalist at the Franco Evangelisti 2017 Nuova Consonanza Competition for the work “Poblando habitación”, premiered at the MACRO Museum of Contemporary Art of Rome with the Suono Giallo Ensemble.

He is currently the head organist at Mexico City’s Parish of the Resurrection of the Lord, pianist and conductor of the Ácido Ensemble, which is a Latin jazz and salsa orchestra, as well as conductor of CoraSon Jarocho, traditional ensemble specialised in son jarocho. He is also a piano, solfège and introduction to music private teacher.