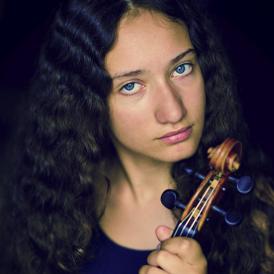 Born in Paris, France, in 2004. She was 16 when she was admitted into the National Conservatory of Paris in the classes of Svetlin Roussev and Pierre Colombet. She has been soloist with the Aperto Orchestra, and she has performed with the Ariège Chamber Orchestra. Additionally, she has played with Le Balcon Ensemble, conducted by Maxime Pascal, at the Comic Opera of Paris, and the Orpheus of Berio at the Paris Philharmonic. She has won the Vatelot-Rampal and Cantagril International Competitions, and in 2021, that of the Clos Vougeot Foundation. She has also been awarded second prize at the FLAME International Competition in Paris. She regularly performs in duo with her brother Antonin Le Faure, also a violinist. She plays a loaned Ivan Kaloferov violin.