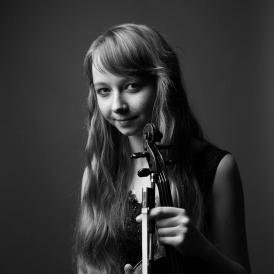 Born in Lviv (Ukraine) in 1996. Since 2014, she studies at the Reina Sofía School of Music’s Telefónica Violin Chair with professor Zakhar Bron. She has been granted scholarships by Goldman Sachs and Fundación Albéniz. Her Majesty Queen Sofía handed her the Diploma to the most outstanding student of her chair in the 2016-2017 and 2018-2019 academic years.

She began her music studies at the Kiev Special School of Music with professor Yaroslava Rivnyak. From 2012 to 2014 she furthered her training at the Conservatory of Bratislava. She has been awarded first prizes at the Dolný Kubín’s Talents of Europe (Slovakia, 2005), Uzhhorod’s Silver Ringing (Ukraine, 2006), Vorzel’s 21st Century Art (Ukraine, 2008) and Young Virtuosi (Bulgary, 2010) international competitions. She has also been awarded second prizes at the Khaskovo’s Simonovoi (Bulgary, 2009), Moscow’s David Oistrakh (Russia, 2010) and at the Mosonmagyaróvár’s Carl Flesch (Hungary, 2013) international competitions. In 2019 she was finalist at the Queen Elisabeth of Belgium International Competition. She has attended masterclasses by Shmuel Ashkenasi, Igor Petrushevski, Natalia Prishepenko, Christoph Poppen, Miriam Fried, Ingolf Turban and Silvia Marcovici.

As a student of the School, she has performed at the AIE Cycle at Madrid's Lázaro Galdiano Museum and Civican Auditorium in Pamplona, and she has been a member of the Freixenet Symphony Orchestra, conducted by Josep Pons, Pablo Heras Casado, Plácido Domingo, Jaime Martín y Pablo González, with whom she performed as soloist at the National Auditorium of Madrid. She has also been part of the Brahms Ensemble and is currently a member of the BP Mendelssohn Quartet and the Stadler Quintet.