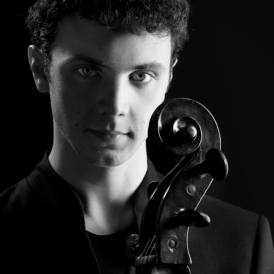 Born in San Marino in 1999. Since 2020, he studies at the Reina Sofía School of Music’s Aline Foriel-Destezet Cello Chair with professor Jens Peter Maintz. He has been granted scholarships by Francesco y Marina Moncada di Paternò and Fundación Albéniz.

He studied in Italy at the Academia Chigiana and at the Academia Stauffer with Antonio Meneses, as well as at the Cello Academy of Pavia with Enrico Dindo. He has attended masterclasses by Jens Peter Maintz, Wolfgang Emanuel Schmidt, Ivan Monighetti, Thomas Demenga, Frans Helmerson, Asier Polo, and Alban Gerhardt. Currently, he is receiving classes from Giovanni Sollima at the Santa Cecilia Academy in Rome (Italy).

He has been granted scholarships by De Sono Association, Turin, Artists ESKAS of the Swiss Government (scholarships of excellence for foreign students), and the Maura Giorgetti scholarship of La Scala Theater of Milan.

He was selected as first cello of the Cherubini Orchestra, conducted by Maestro Riccadp Muti. He has also performed as soloist with the WDR Symphony Orchestra, I Virtuosi Italiani, North Czech Philharmony, and Marchigiana Philharmonic, with whom he performed Shostakovich’s cello concerto no. 1. In 2020 he released a CD with David Fontanesi’s concerto for cello and orchestra along with the I Virtuosi Italiani Orchestra.