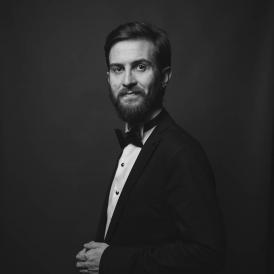 Born in Ferrol, Spain, in 1991. Since 2017, he studies at the Reina Sofía School of Music’s Fundación Ramón Areces “Alfredo Kraus” Voice Chair, currently with professor Susan Bullock CBE. He has been granted scholarships by Copasa and Fundación Albéniz. In 2020 he received the Diploma to the most outstanding student of his chair.

He studied the degrees in voice (in which he passed with Honours second, third and fourth year) and saxophone at the Xan Viaño Professional Conservatory of Ferrol. He has attended repertoire courses by Alberto Zedda, Ricardo Estrada, and Roberto Accurso. He has studied with baritone Juan Jesús Rodríguez and as a student of the School, he has attended masterclasses by Leigh Melrose, Teresa Berganza, David Butt Philip, John Graham Hall (also during the Santander Encounter of Music and Academy), Konrad Jarnot, Francisco Araiza and Adrian Thompson.

In 2019 he was awarded third prize at the International Voice Competition in Logroño. He has offered several concerts and given recitals with the Royal Philharmonic of Galicia, conducted by Maximino Zumalave. He has participated in the Opera seasons of San Sebastián, Vigo, and Málaga, and has premiered a Spanish opera of composer Fernando Vázquez Arias, as well as works of Juan Durán or Xabier de Paz. In 2019 he took part in the “Las Nuevas Voces Gallegas” series of the lyric season in A Coruña, in the Portuguese Ikfem Festival, and in the 11th Autumn Music Festival in Casa de las Flores, which is held at the Palacio Real de la Granja de San Ildefonso. He made his debut as Figaro in the lyric season of San Martín Pinario (Santiago de Compostela).

As a student of the School, he has been a member of the Fundación Orange Voces Tempo Ensemble.