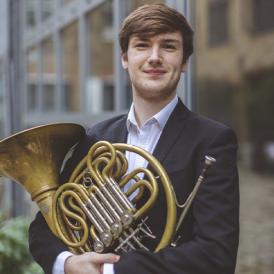 Born in Manchester, United Kingdom, in 1999. He has played with orchestras including BBC Philharmonic, London Chamber Orchestra and Manchester Camerata. He is a member of the Santander Encounter of Music and Academy and the Britten-Shostakovich Festival Orchestras, and in August 2022 George will be joining the Lucerne Festival Academy. His recent solo engagements include recitals at Queen’s University Belfast, Ludlow English Song Weekend, and Strauss’ Horn Concerto No. 2 with the Macclesfield Symphony Orchestra. George studies at the Royal Academy of Music, London, where he is now a Chamber Music Fellow. George Strivens is grateful for the generous support of the Royal Philharmonic Society.