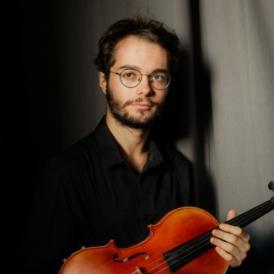 Born in Bourg-la-Reine, France, in 1999. He was raised in a musical environment, reason why being a chamber musician became his favourite way of performing with others. He started to play the violin at the age of 5. Afterwards, he discovered the viola through Garth Knox, during a festival in 2014, which led him to study with Claire Merlet. He currently studies viola with David Gaillard and chamber music (piano quartet) with Claire Déset at the CNSMD of Paris. He has also received advice from Máté Szücs, Françoise Gnéri Nicolas Bône, and Sabine Toutain. In 2018, he was awarded second prize at the Concours National des Jeunes Altistes. In 2021-2022, he was an academist at the Paris Chamber Orchestra.