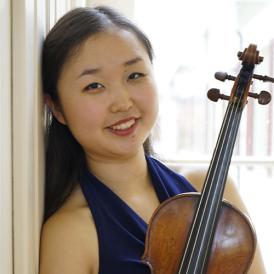 Born in Zurich, Switzerland, in 1997. She is currently studying her Master’s Degree in Excellence in Performance with Mi-Kyung Lee at the University of Music and Performing Arts in Munich, Germany. Previously, she had studied with Andreas Janke and Philip Draganov, and she attended masterclasses with Ana Chumachenco, Dmitri Sitkovetsky and Nora Chastain, among others. She has won the first prize at the Marschner International Competition and second prize at the Lions Music Competition. As soloist, she has performed at the Orchestra della Magna Grecia, Baviera Philarmonic and Zurich Academic Orchestra. She has been granted scholarships by Lyra, Fritz Gerber, and Friedl Wald Foundations. The National Swiss Television recorded three documentaries about her that were internationally broadcast.